Whitefly is not something you’re likely to have to worry about. Whiteflies don’t really go in for cannabis plants but you can’t be too careful, nasties can take-up anywhere. They’re related to Aphids, and also love that Honeydew excreta which has the two problems of becoming sooty mold and attracting ants who will go out their way to protect their treasured Honeydew. Like Aphids, Whiteflies can cause significant damage to your crop.

NATURAL ENEMIES OF THE WHITEFLY

Have a look at your yellow sticky cards, and if you see Whitefly then speedily release Encarsia formosa, a parasitic wasp. You should have 1 wasp for every 10 square feet of greenhouse. 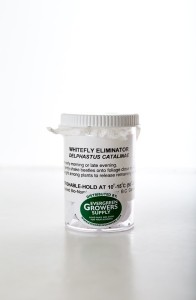 A friendly little bug, family to the ladybug but smaller. Delphastus is a Whitefly predator which prefers to eat from a sizable population, and also likes temperatures between 61°F and 90°F. It will feed on Whiteflies during any stage, but is more effective as a biological control when the Whiteflies are in the egg or nymph stages.

It should go without saying that monitoring tools are very sensible. They let you know what kind of pest you’re dealing with. Since you’ve invested time and money, you want to stay on top of any potential problem.

Use these to detect Thrips. Place 1 trap for every 500 square feet of greenhouse. Be careful to place the traps lower than the plants, otherwise the Thrips will choose the plants instead of the traps.

Strike and Provider varieties of Bush Beans can be really useful, and you’d be doing yourself a favor to keep Bush Beans growing alongside your cannabis plants. And plant them close to, even touching, the cannabis plant. Grow them from seed, or you might bring in pests from the nursery. Some nasties find Bush Beans very attractive and will maybe even migrate across from the cannabis. Then you can wrap of the Bush Bean plant, dispose of it, and grow another in its place. Repeat the process until your crop is fully grown. It’s good to know that this method has been notably successful for growers of Mother Plants.

Expect especially good results when it comes to Spider Mites. Other nasties that you’ll be able to manage with Bush Beans are Thrips, Fungus Gnats, Aphids and Whiteflies.